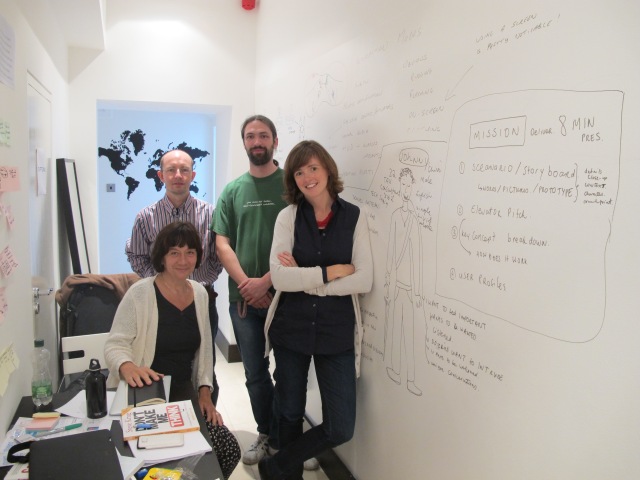 Twenty five designers, developers, techies and geeks assembled at ‘Furious Tribe’s’ offices in Dublin, on Saturday morning August 31st 2012 to examine how we might use this city in 2042. Unfortunately, there were no crystal balls available so we would have to rely on our imaginations and psychological understanding of what people might need in the future. 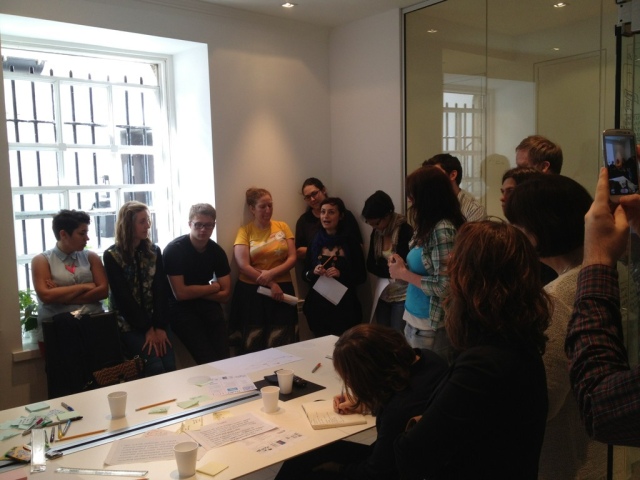 The scenario was set, Dublin in thirty years time where Wi-Fi is pervasive and data is open, freely generated and accessible by everyone. We were asked to design a service to help visitors to Dublin ‘become local’, to discover hidden gems and connect with the city over a short time in a meaningful way.

This was a user experience (UX) challenge, so it went without saying that we had to strive to make it useful, usable, intuitive, satisfying, accessible and maybe even enjoyable and delightful. You had to consider all the interaction mediums, including senses, sound, smell, touch and sight.

My team was made up of me, an Architect and Innovation Consultant, Mike McHugh a Developer with Zoo digital, Filip Szymczak a Web, UX and Graphic designer and Finally Gabriela Avram a Lecturer in Digital Media from University of Limerick.  Our work space was a corridor that had been painted with whiteboard paint, so we could draw to our hearts content like children on the walls. 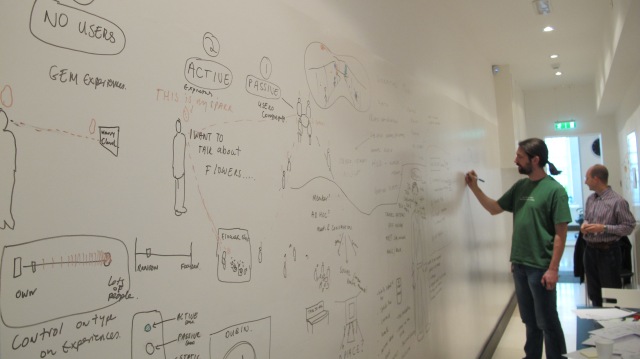 We generally discussed the issues and the delights of traveling experiencing ‘Gems’. We tried to understand the essence of the problem and brief by articulating what a ‘local’ meant and what made Gems so special. We tried to imagine what Dublin would be like thirty years from now, what would be historical? how would people be living their lives? still working in cities? Would society have become more singular with so much personalisation of technology and preferences? And what would be the backlash to these controlled experiences? 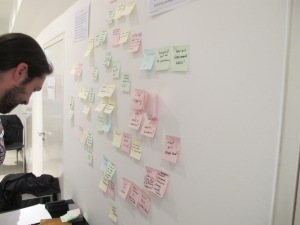 We used design-thinking methods to interrogate the problem, which has been defined by Tim Brown from IDEO innovation consulting company as –

‘A discipline that uses the designer’s sensibilities and methods to match people’s needs with what is technologically feasible and what a viable business strategy can convert into customer value and market opportunity’.

We brainstormed the problem with post-its, individually trying to articulate what the issues were. These ideas were then grouped into similar themes that varied from different themed routes in the city, instant translators, the high tech and low tech solutions, exploring the risk appetite of the user and could our service make people any happier. We then tried to draw insights from this and imagine a concept that would move this mystery down the knowledge funnel to something that we could begin to shape and sculpt.

We felt that for a visitor to feel like a local in a short period of time, they had to have a meaningful conversation with the city. This type of intimate interaction got us thinking about social bon fires and the sparks that are catalysts for conversation. We drew an empathy map of user, ‘Johnny’ from China, who was thirty two years old, a tax consultant, single in Ireland on business and would like to have meaningful conversations.

All the teams reconvened after two hours to share the direction in which they were heading. This was a good opportunity to get feedback and test out the validity of the ideas. I found it interesting that many teams choose similar approaches with a high expectation on technology to do the research and make the decisions for you. There is also a challenge with this premise for the future, when do we switch off the technology to make free decisions and craft out our own routes to create our own stories? because so often in life, you deserve to find ‘Gems’ as you’ve made the effort to search them out and that’s part of the reward for the effort. 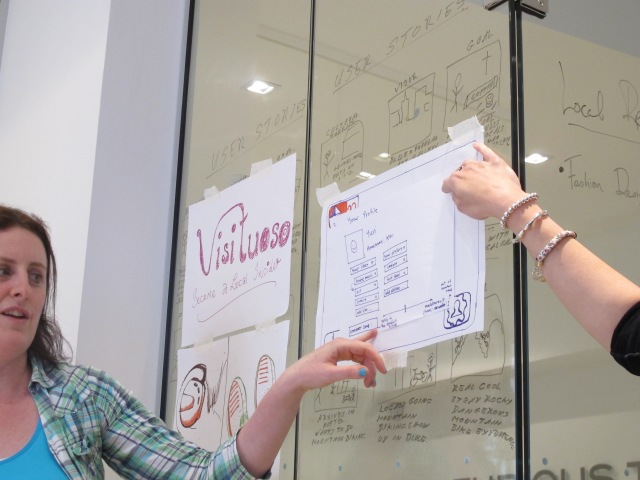 Team one started with the idea of creating a heat map of Dublin with their interests highlighted, their would also be locked areas with ‘Gems’ and a user would gain access only if they passed the test of matching the criteria to deserve to get in.

They developed it further and called it Visituoso and imagined as a visitor was approaching Ireland on a plane, they would be able to watch a collection of videos through the airline Wi-Fi tailored around what he might be interested in.

We would have a print out of an events book, with heat maps and to go places and their device would ‘chirp’ to announce there was a ‘Gem’ three minutes from their location. The user would then have to answer a question to gain access, and if answered incorrectly would tell you ‘this Gem is not for you’. The service is a sort of game and if the visitor can get twenty gems in total on his visit, they win the prize and can officially call themselves ‘a local’! – Many visits may be required to gain that status. 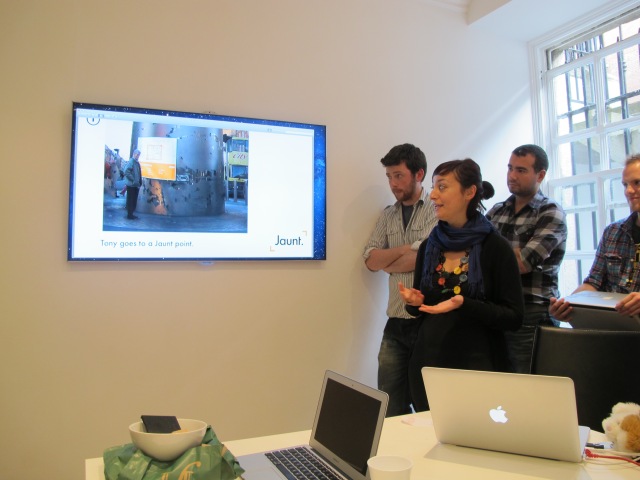 Team two started with the Landmark of Spire which they called the ‘Jaunt’ point, which is the main meeting point for many nervous travellers. Their idea was that this inanimate object would dispense information about specific literary ‘Jaunts’ around the city. The user would receive a map with holes punched showing the location of their route, they would also be able to find out if there were other people on the literary route who fancied meeting up for chat about their shared interest. They also used the post card to share their route with friends at home as the humble piece of technology may illicit the same response as the polaroid camera does today. 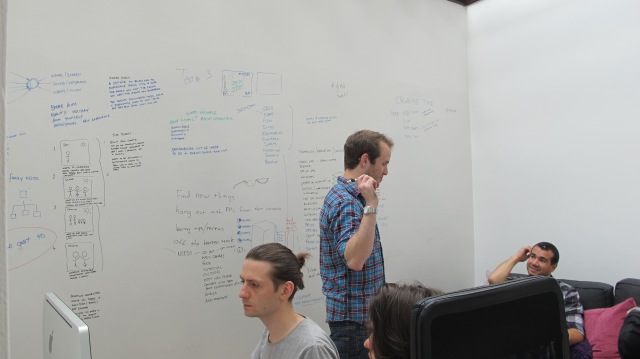 Team three set out with the aim to create a multi-sensory device that would access how you hear, taste and smell the city, and learn from you as you explore.

A User would be given a map of Dublin red spots indicating their personal interests, blue dots with general interest items.  As you experienced each place you would access how you liked it in terms of the noise, smell, taste and it’s aesthetics.  If you had a bad experience the map would recalibrate and learn from this with it’s next suggestion, each venue would have its own personality.

They also considered how this would be used by groups or families. The team imagined there would be a parent, slave device that would gather Information from all the devices and come up with a solution that would work for everyone. But there is also could be danger with so much compromise that the system will come back with the response of ‘no match or result found!’ 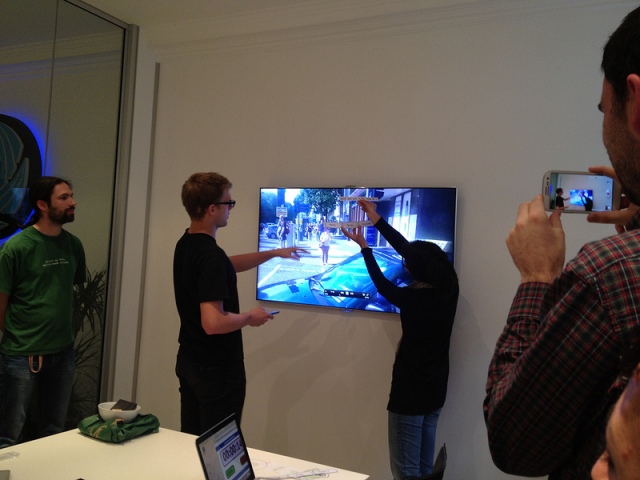 Team four started with the premise that they would have a stalker profile from Google, Facebook, LinkedIn or from whatever service will be available in the future. They demonstrated a novel prototype by having a video of someone leaving their hotel, wandering up the street and deciding where to go. Their Google type glasses brought up options of ‘What do you feel like?’ – music, culture, sport, shopping etc. Using your hand to swipe music, you’re then told where a gig is happening, your played a sample of the music and you decide if that’s where you want to go, Google’s red arrows then lead you to the venue.

Team Five  – Conversations with the City 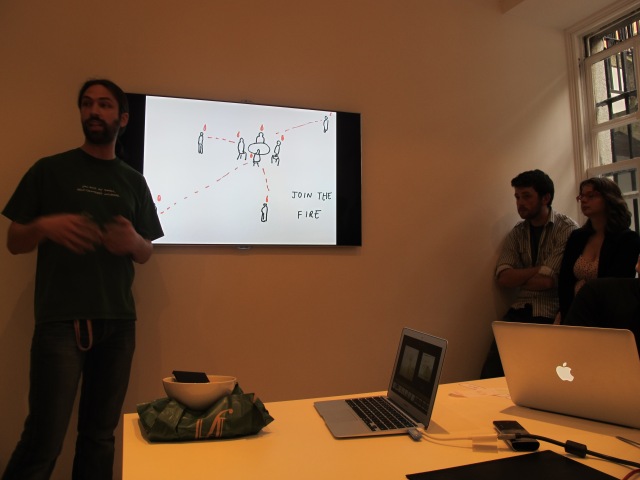 Our Team presented our Conversation with the City called ‘Sparks’. We wanted to plug into the randomness and serendipity that people love in life but also create a mechanism to start up those random conversations. Everyone would have a spark, you could opt in or out, depending on your mood. Your personal assistant would direct you to social bonfires where you would be welcome, you could also bring your spark to an individual who was open to conversation and tell some stories about the cities. We were interested in stories that stick and the movement of fire and sparks around the city.

Stepping back from the benefits that these technologies could bring to us in the future, it will be interesting to see who is stalking us in thirty years time and tracking our movements? How will we behave? What will we value? And what will we idealise?

After our flurry of ideas and imaginative wanderings, we disbanded to the nearest pub without an app in sight to access if we were happy with the choice. What’s extraordinary is that we have a built in code that helps us get along with relative strangers and start conversations by finding common ground and building on it from there. I wonder if a sophisticated database and service will transcend the need and desire for us to have these conversations and provide us with the same humour, changing expressions, clinking of glasses and pleasure of enjoying shared experiences…          We will have to see.